“Poignant and compelling…it offers assurance that even the most disadvantaged   individuals can speak out and do something.” — Salt Lake City Tribune

SEVEN is a documentary play… 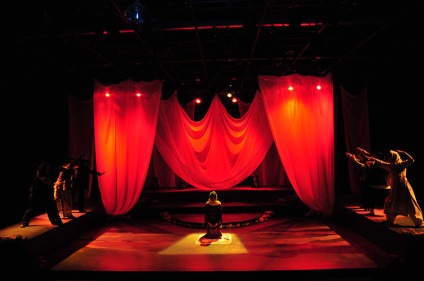 A riveting piece of documentary theatre, SEVEN tells the true stories of seven women who bravely fought for the well-being of women, families, and children around the globe: in Russia, protecting women from domestic violence; in Cambodia, rescuing girls from human trafficking; in Guatemala, giving voice to the poor; in Afghanistan, empowering rural women; in Nigeria and Pakistan, fighting for women’s education and rights; and in Northern Ireland, promoting peace and equality.

“Riveting, explosive, and inspiring drama…starkly emotive…reaffirm[s] the belief that one person could indeed make a difference.”— Huffington Post

Seven acclaimed playwrights collaborated to create the compelling tapestry of stories, weaving together the words of seven remarkable women who faced life-threatening obstacles to bring about major improvements in the lives of women and girls in their home countries.

Performed by casts of all kinds–young or old, actors or not, celebrities, students, politicians–and with either full staging or as a reading, SEVEN has now been translated into more than 20 languages.  It has been seen by audiences all around the globe–in fact, in 32 countries!  And in the US, the play has been performed in 22 states so far, with more on the way.

“It was impossible not to be inspired by the widely varying examples of courage that the project corralled.” — Washington Post

Videos: Watch the SEVEN trailer, introduced by designer Diane von Furstenberg, and, below that, watch excerpts from the performance by NATO generals at SHAPE Headquarters, Belgium.