The upcoming production of the Winters Theatre Company, Seven, is not the usual comedy or light fare presented by WTC.  Seven is a documentary play which celebrates remarkable women changing the world.  It profiles seven human rights activists in Pakistan, Cambodia, Northern Ireland, Russia, Guatemala, Nigeria and Afghanistan. 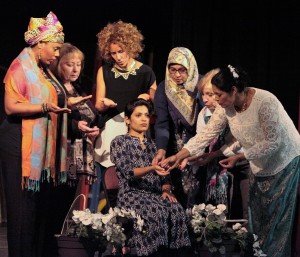 “This play was especially chosen as the Fall show because October is Domestic Violence Awareness Month,” states Anita Ahuja, director of the production who also works as a Manager for the California Victim Compensation Board.   “It’s tragic that so many women around the globe continue to suffer from domestic violence and other crimes such as human trafficking and are barred from being educated. Seven delves deep into these issues and inspires us to help.”

The show profiles the lives of seven incredible women who overcame great obstacles in order to help others.  Through storytelling and ensemble performances, the experiences of these women are brought to life.

Seven has been performed around the world in many different languages, and in 22 states in the US, and supporters have included Meryl Streep and Hillary Clinton.  A group of NATO generals, yes, males, presented the script as a way of raising awareness about the issues faced by women.  The show has also been performed for the United Nations.

This entry was posted in Performances, Seven in the News, US and Global, US Performances. Bookmark the permalink.
%d bloggers like this: